Chuck and I have about a million favorite restaurants, but Boca is pretty high on the list. They are always coming out with more and more impressive items on their Spanish style menu, and they never disappoint.
This recipe is my own version of something off one of their tappas menus. They served piquadillo peppers stuffed with a wonderfully creamy red lentil stuffing that was pocked with texture building black beans. It was served on a super hot plate topped with an amazing salsa verde.
For my version I went with a larger bell pepper, mostly so I didn’t have to stuff 8 million peppers for one meal, and they were cheaper. I served a premade salsa on the side, because I’m a busy girl, and an added side of Spanish style rice to make it a little heftier.
It came out wonderfully, and I have now made it a bunch, it’s so filling that even Chuck doesn’t mind that it’s ‘gasp’ vegan. I mean woah. He does prefer to put the rice inside his pepper rather than on the side.
This is the kind of thing that would make a great dinner party or picky family meal. You could set up all the fillings, meat, rice, cheese, beans, or sautéed veggies and let each person stuff their own pepper before popping them in the oven together.
For someone who always thought they didn’t like stuffed peppers, I am now a convert. 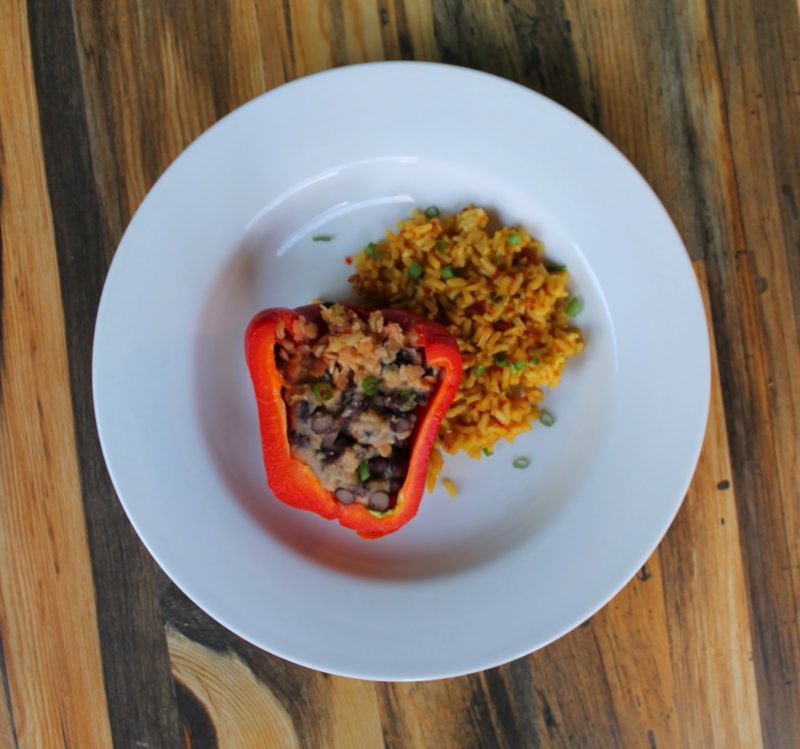