I was truly afraid of several things in this meal, but we are constantly taught not be afraid of something just because it’s different so I figured I would be adventurous, and I’m glad I was. As it turns out this is one of the easiest meals I have ever made, and I think it will become one of those weeknight staples, I pull out pretty often. 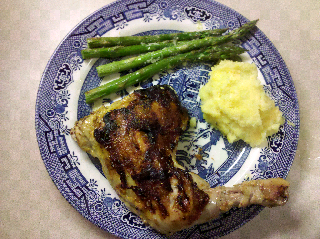 I started with the yogurt marinated chicken that I saw on chopped it seemed pretty simple, and it was very weird to me so I thought it would be a good experiment. Since I was experimenting I thought I would try some polenta. I had been toying with the idea for a while, and had even bought a package of Bob’s Red Mill a few months ago, but never opened it. This was probably one of the easiest things I ever cooked. Simply add 2.5 cups of water to 1 cup of polenta, and let it simmer, stirring constantly, until softened. Then add some parmesan cheese and garlic powder to taste then set aside off heat, until the mixture begins to pull away from its container. There is so much more you can do with it as well, such as add sundried tomatoes or asparagus, which I almost did since I was already planning on making it, but for my first time I wanted to experience the plain and simple thing as it was. It wasn’t bad, the consistency was different than I’m used to but other than that it was pretty good. I will definitely add some other vegetables to it on the next attempt, simply because the only thing it was really lacking was seasoning, which can’t be blamed on it anyway. On to the chicken!
As always I did a little research on my ideas and came up with this recipe from Alex Guarnachelli.When I saw this recipe I got super excited because of its use of Harissa. I was newly introduced to this condiment 2 weeks ago during a tasting at JK Adams in Dorset Vermont, by Teeny Tiny Spice Co. of Vermont. I purchased both the Harissa as well as Tandoori masala spice mixes. For all of my love of cooking I am pretty bad at North African, Middle East and Indian flavors. The depth of the way they blend such strong spices escapes me for the time being, however it’s one of those things that I am striving to attain. I digress, since I had already tried the Harissa on plain ol’ baked chicken, I decided to alter the recipe and use my Tandoori Masala Spice mix, the fact that the website even states that its used in yogurt marinades helped me with that decision as well. I made a few glaring changes to the original recipe I found, mostly because I wanted to really get a feel for the Tandoori Spice mix.
Tandoori Yogurt Marinated Chicken
1 container plain Greek yogurt
1.5 Teaspoons Tandoori Masala Spice Mix
2 Chicken thighs & Legs (Bone in, with skin)
Non Stick Spray
Blend yogurt with spice evenly in a baking dish. Coat chicken evenly in yogurt mixture and place skin side down, covered with plastic wrap to marinate overnight (WARNING: this is gross, something about the raw chicken and gloppy yogurt is just not appealing). Remove chicken from marinade, leaving excess and place skin down on a hot grill pan with non-stick spray. Allow to cook until the skin is browned and crispy, then flip and allow to cook through. In the interest of time I put a cover over the chicken to make sure it was cooked through a little faster; however this meant at the end I had to turn up the heat and flip it back to the skin side for a few minutes to get it crispy again. Remove from heat and sprinkle lightly with a little more Tandoori Masala.
The chicken was delicious. It was rich and juicy, and full of flavor, though I have to say there was easily room to add more of the spice mix to the marinade or at the end. I didn’t get a lot of the heat that I think it has to offer, but I was being cautious in my use of it as I am just starting to become accustomed to spice. That’s something that I think can be suited to the chef. Lastly I whipped up a simple asparagus dish which was to toss the whole vegetable in oil and roast them on a cookie sheet at 425 until tender, then toss with a little lemon juice. Adding a little acid to this meal I think is a must to help balance it all out.
All in all this meal was exceptional for the ease and simplicity, plus it’s really very cheap. The total came to $2.37 a serving, so a total of $5 bucks for both me and chuck. It was delicious, gourmet style, and rather healthy. Who knew?
Tweet
Pin
Share
0 Shares
Previous Post: « Dandelion Season!
Next Post: Goals »