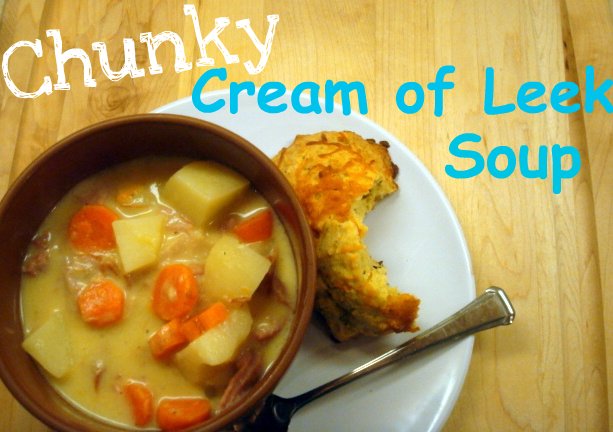 Notice the massive chunks of potato? Chuck wanted to help. I can’t decide if he was being nice or wanted to speed up the process. Either way I will take it. He may be a little behind on the cooking chopping thing, but he’s learning, and I appreciate that. Maybe someday I will be able to trust him with a whole recipe.

This recipe is one I made up. We had a cream of leek soup at The Bread Basket Bakery in Saratoga Springs a few weeks ago. It was pretty awesome, and I wanted to make it, but I wanted a little more substance so it would be a whole meal. I don’t know about you but I certainly don’t have time to make a soup, and a main course by the time I get home during the week, at least I don’t feel like I do, so I opt for hardy soups instead.
Chunky Cream of Leek Soup
3 large leeks, diced
3 tbs butter
2 cups vegetable stock
2 medium potatoes, peeled & chopped
2 large carrots, peeled & diced
½ lb cooked ham, cut into roughly 1” pieces
2 tbs heavy cream
In a large pan sauté leeks with 1 tbs butter until they begin to soften and brown. Add 1/c a cup of stock and allow the liquid to just begin boiling. Carefully transfer to a blender (ladling in small batches works best) and blend until smooth. Use the remaining butter to begin sautéing potato and carrot. Suate until they begin to soften & brown. Add the rest of the stock, blended leeks and bring to a boil. Reduce heat to a simmer and add ham. Allow to cook for roughly 20 minutes, or until the carrot and potato are soft. Whisk in cream and adjust seasonings. Serve warm. (Serves 2) 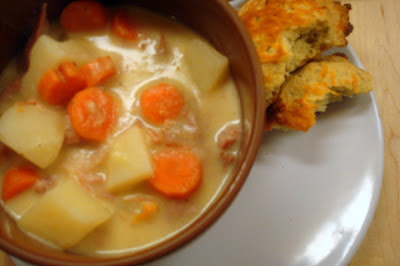