Waking up in Doolin was pretty interesting. It was a gorgeous little fishing town nestled into the hillside. We had our first real Irish Breakfast here. As we found out each Irish Breakfast is a little different but all the basic parts are the same. It starts off with a fried egg, two sausages, two or three slices of rasher bacon, a tomato (cherry, or sliced) that has been cooked, some pan fried mushrooms, black and white puddings, and sometimes what we call hash browns. Sometimes they also include toast. Tea and coffee are always made to order, and you almost always get your own little pot of the stuff, never someone walking around filling your cup for you. We both loved waking up to this every morning, it really was wonderful. Irish bacon, is not like our in that it’s really just like a thin slice of ham, that is fried like bacon, though we found that they even call what we call ham bacon. The sausages were just like dinner sausages, nice and light in flavor, I really loved their sausages, but I will discuss this more later when I give a hand at making them. Now for the puddings; black and white puddings sound gross, and actually taste pretty darn good, once you get past the idea of what you are eating of course. The black pudding is typically made of pigs blood, while white puddings are typically just beef fat, they of course have to some other things mixed in but that’s the main part of it.

Now this was a dish i really wanted to make, but it turned out much more challangeing than i thought. Turns out that no one would seel me pigs blood. Not that i’m emtirely suprised but man the looks on peoples faces when i told them what i wanted to do. 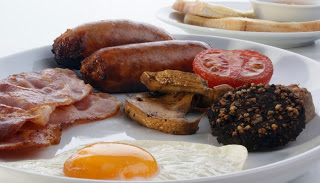