You might have noticed a growing tally in all of my Recently posts that highlighted what we spent on food and garden goods. The average was just over $250 a Month on Groceries. I did this as an experiment to see what we actually spent on food throughout the year. As an engineer, optimization is something that I’m really enamored with and optimizing some of the biggest (and most important) life expenses we have is something of a goal of mine. For most people, groceries/dining out is easily one of the largest bills that they have, so I thought that this would be a good place to start. 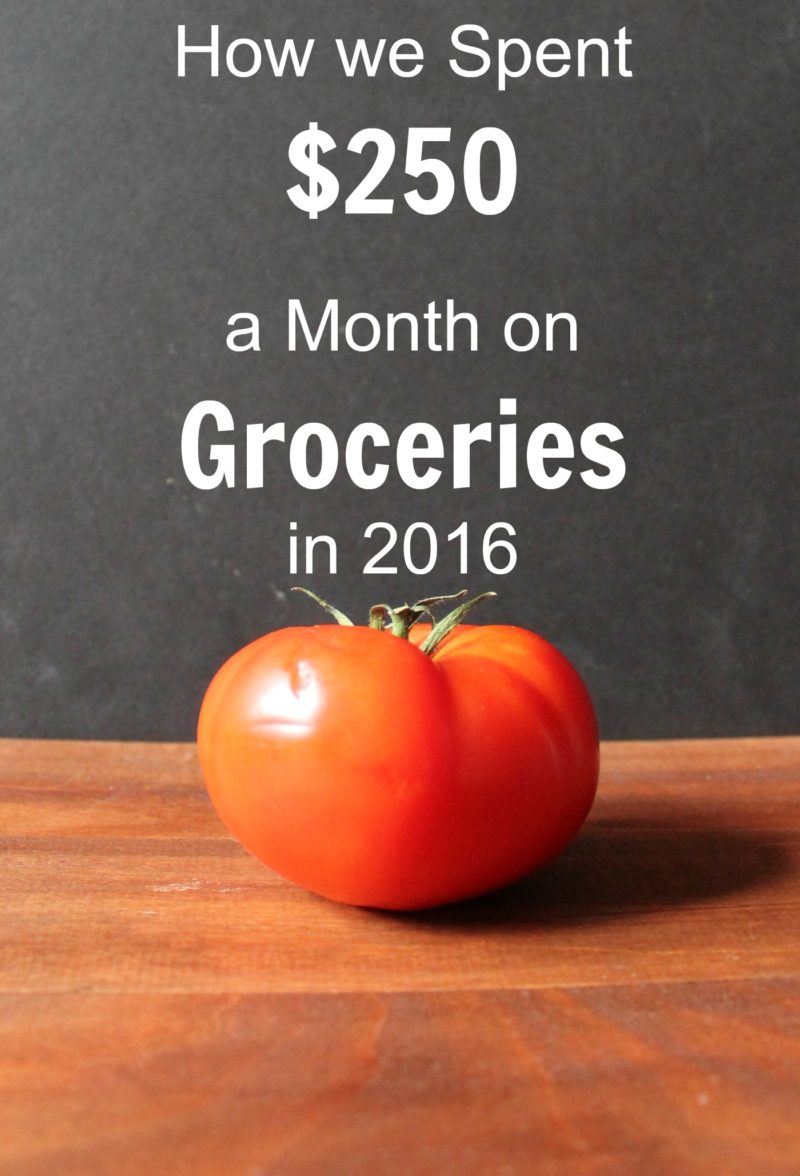 I have to say, I’m a little disappointed in these results. I really felt that we spent less on groceries than this, but I guess that’s just not true. In all honesty, these numbers aren’t terrible, I know plenty of people spend double if not triple on groceries for the week, I just felt like we could do better.

Notes on the Numbers:

I wish I had the time to actually photograph each of our grocery trips, but unfortunately that’s just something that hasn’t worked out. To give you an idea of what we typically buy per week: Salad stuff (lettuce + seasonal veggies), 1-2 green vegetables (broccoli, asparagus, green beans etc.), starches (usually in bulk, including potatoes, rice, & pasta), beans & lentils, a seasonal fruit for lunches, 2-3 lbs of meat (the rest comes from hunting), 1 lb of fish, juice, eggs, frozen shredded potatoes, occasionally frozen vegetables, cheese, wraps, granola bars. There are some other things that pop in and out, but this is what we typically eat in a week. I feel it’s also important to mention that at the beginning of the year we were eating out a lot, like weekly, we have since reduced this to once in a while, but it should be mentioned so you understand how our budgets work.

I have written before about how we meal plan, but if your interested in learning more about what I cook each week also check out my regular meal plan series.

I also want to mention that these numbers also include typical household products, soap for Chuck, paper towels, dish soap etc. Not all of them are purchased with groveries but a fair amount.

A large portion of our meat came from hunting & fishing. I did not add the cost of this to the calculations. During hunting season (usually the 3rd week in September until Dec. 31, including additional seasons for rabbit and turkey) Chuck spends every free moment in the woods, weekday evenings and entire afternoons, not to mention the time it takes from both of us to process the stuff. Fishing is a year round activity that we both enjoy whenever possible. Licenses for all this cost us roughly $300 a year (thank you 1 time purchase lifetime licenses).

I don’t add that amount of money because it’s a hobby as much as a food provider. What would we do with all that free time? If we went to a movie at $10 a ticket every other  weekend instead it would add up to way more than we spend on hunting. So I consider the meat we get from hunting a little added bonus.

Adding up the exact costs of my garden are a bit difficult because I reuse a lot of stuff over the year, we receive a number of gifts from family and friends, and the like. I added up as much of the costs as I could this year along with my grocery totals and that number was $221. I also have no clue how much produce we received because I didn’t actually weigh it. I honestly think that getting that technical would take away from the enjoyment that I get in the garden. Walking out there every evening in the summer and just grabbing something to toss in with dinner is a convenience I am not willing to part with.

I didn’t add this cost either because these costs included items for flower beds and again it’s a hobby and something that I would do anyway even if it didn’t provide us with any financial benefit.

I had fun tracking our spending this year and would really like to do a better job next year, especially since we are adding a number person to the mix.

One thing of note for next year is that we are heading into 2017 with 3 full (bursting) freezers, and a completely full pantry. As much as I try to use up our pantry stock I can’t help myself when I see a good sale, and the last 3 months I haven’t been actually cooking a whole lot (pregnancy blahs). We are stocked up and It’s going to be a big goal of min in the first few months to go through and clean it all up. It’s important to rotate stock so nothing goes bad.

The hope is that next year I will be able to spend a little less on groceries, though that may be challenging with a new born. I’d like to reduce our meat consumption a little more, increase our garden production (I learn so much every year), source some better bulk options, and do all this while still eating well of course. I’m not putting a ton of pressure on myself to do all of this though because, well, I’m having a child in the middle of the summer growing season, and that’s so much more important.