I don’t know what’s gotten into me and Chuck lately, but we
love the Chickpeas. He saw a recipe for toasted Chickpeas in a magazine in the
bathroom at his mothers; apparently he had no other reading options (boys!) and
wanted me to make them, so from his memory and my experimenting I came up with
this recipe.

Spread chick peas out over paper towels and allow them to dry. Preheat the oven to 400 degrees. Transfer chickpeas to a baking sheet and drizzle with oil, Sprinkle garlic powder and salt over the top, and give them a good toss to coat. Bake in the oven for 45 minutes, or until they become golden and crispy. Once semi-cooled toss with parmesan cheese and serve. 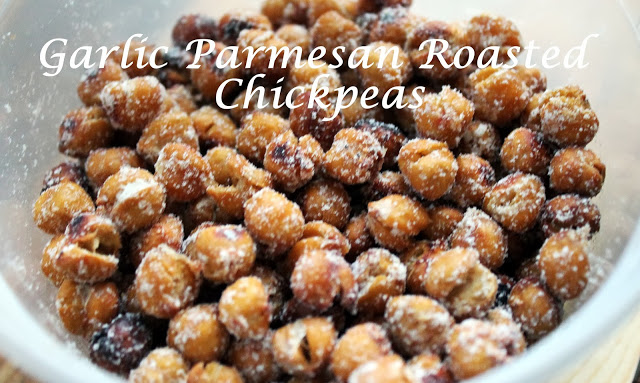 Then last week I came across a pretty fancy recipe in Bon Apetite, which I was dying to make when I first saw it months ago, but so not feeling like putting the effort into. As you know I love to improvise, and made it up my own way. This resulted in the recipe below, which is an awesome, single skillet, budget friendly and vegetarian meal. Now I did serve this with a side of meat for Chuck, though I ate just this dish and it was completely satisfying for me. 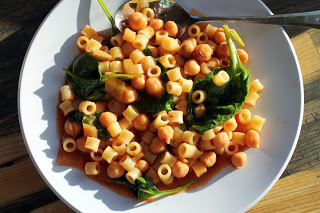 Cook ditalini according to package instructions, reserving 1 cup of the cooking liquid. Meanwhile in a large skillet saute onion in oil, until it begins to turn translucent. If you are adding carrot add it at this time. Stir in chickpeas, tomato paste, pasta water, rosemary, and cracked red pepper. Cook for 5-6 mintues, stirring often. Remove from heat, add spinach and toss. Adjust seasonings and serve warm. (serves 4-6)

Since I’m talking about Chickpeas I thought it only appropriate to also add my Super Garlicky Hummus Recipe. I make this all the time, because it’s so easy. I have also been known to swap the garlic for roasted red peppers, jalapeños, herbs, sun dried tomatoes and about a million other things. It’s pretty versatile, so you can add nearly anything, oh and did I mention it’s cheap? You can get a whole 16oz can of chickpeas for less than a dollar, and most of the other vegetables and oils that can be used to mix in are things that you probably have in your pantry or can be leftover from another recipe, so at the most you would spend 2-3 dollars total for double or even triple the quantity of the premade stuff that typically costs 4-5 dollars. I simply cannot understand why anyone would buy hummus to eat at home when it is this freaking easy. Really check out the recipe below if you don’t believe me.

Place all ingredients into a blender and blend until smooth.
Add more water if the mixture begins to clump. Serve immediately, or store in the fridge for up to 1 week.
Tweet
Pin1
Share
1 Shares
Previous Post: « Rainy Days & Lemon Oregano Chicken Paillards
Next Post: Dinner & Lunch for 1: Healthier Twice Baked Potato & Grilled Cheese »